Ernest Hemingway’s love affair with Cuba spanned over 30 years. Known as ‘Papa’ to the Cubans, the American writer was adored by the islanders and his fondness for their country is evident in both his life and work. We pursue all things Hemingway in Havana and also discover the coolest places to smoke a Cuban cigar. 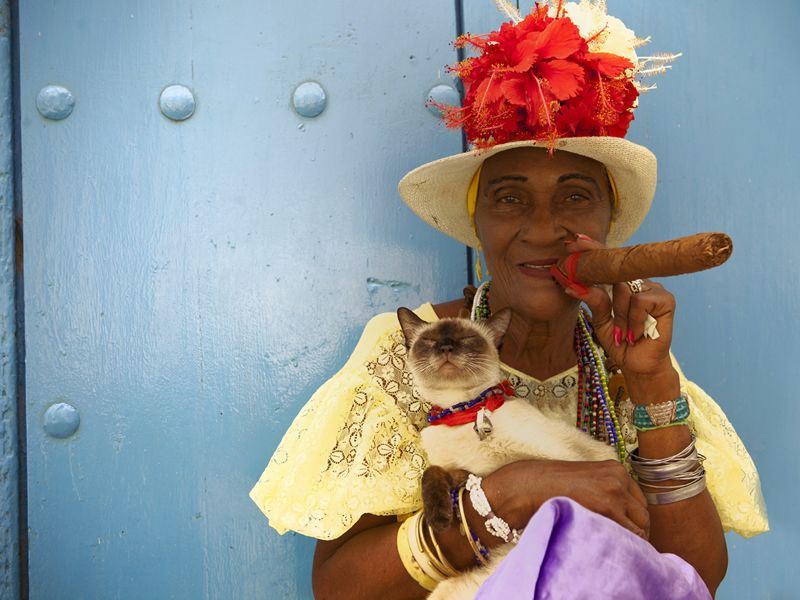 10. La Casa del Habano
Where: Inside Partagas Cigar Factory, 520 Industria Street, behind the Capitolio building.
Why: Rated as one of the world’s best cigar stores, La Casa del Habano offers smokers a high-end experience. All the famous brands are sold here: Partagas, Hoyo de Monterrey, Ramon, Allones, Bolivar and the complete range of Cohibas.
What: This well-respected cigar store opened in 1990 and is the discerning cigar smoker’s destination of choice. Cigar connoisseurs and souvenir seekers can buy single or boxed cigars, sold by knowledgeable and experienced staff happy to assist novices in selecting the ideal taste, shape and size. There’s something for every cigar smoker here and prices are very reasonable. Customers can enjoy a drink at the bar or take lunch in the restaurant here before retiring to the comfy cigar lounge for a smoke par excellence.

9. La Bodeguita del Medio
Where: 207 Empedrado Street, near Plaza de la Cathedral in Old Havana.
Why: “My mojito in La Bodeguita” Hemingway wrote in reference to the Cuban signature cocktail that was his drink of choice. Housed in a small colonial building, this iconic bar-restaurant was founded by Angel Martinez in 1942 and proved popular with artists and bohemians. It is considered by many as the birthplace of the Mojito cocktail, a Cuban highball made with white rum, sugar, lime juice and mint.
What: Know locally as the ‘B del M’, .the Spanish name of this legendary watering hole translates as ‘pub in the middle of the street’. Almost every available inch of wall space is covered in photographs and sprawled signatures of people who have visited — the most famous graffiti credited to Papa Hemingway. Visitors should sample the delicious Cuban cuisine, smoke freshly rolled cigars and raise a glass to Hemingway with an obligatory mojito.

8. La Terraza Restaurant
Where: In the seaside town of Cojimar, a 20-minute drive east of Havana.
Why: The terrace Hemingway wrote about in his novel ‘The Old Man and the Sea’ was La Terraza, a fisherman’s bar in Cojimar where he dined at frequently with Gregorio Fuentes, the skipper of his boat, El Pilar. This restaurant is a must for Hemingway fans touring the island.
What: The walls of La Terraza are adorned with framed black-and-white photos of its most famous guest, including an oil painting of Hemingway that is a photo-hotspot for Papa fans. The ambience is such that one half expects Papa to come rolling in to the bar with his fishing friends; think cool sea breezes and crashing Atlantic waves. Considered one of Hemingway’s favourite spots, this former fisherman’s hangout was restored in 1991 and is now famed for its sumptuous fresh seafood.

7. Ambos Mundos Hotel
Where: At the intersection of Obispo and Mercaderes, just steps away from the Plaza de Armas.
Why: Hemingway lodged at this 1920’s hotel periodically between 1932 and 1939 whilst writing the first chapters of ‘For Whom the Bell Tolls’. He stayed in room 511 on the fifth floor, which is now a museum complete with his typewriter, glasses, writing table, drawing pencil and other memorabilia.
What: This salmon-hued colonial building allures guests with 52 rooms adorned with Art Deco decor, the first-floor piano bar and a quaint rooftop bar-restaurant. Hemingway’s room, with its exceptional views of Havana and the harbour where he fished, has become somewhat of a shrine; the hotel charges approximately £1.26 to view the room, the same price that Hemingway paid per night, but hotel guests get to visit it for free. Nowadays a standard room at Ambos Mundos costs from £70 per night.

6. Hotel Nacional de Cuba
Where: In the central Vedado district, overlooking the Malecon, Havana’s oceanfront boardwalk.
Why: Opened in 1930 as a rum-soaked playground for the famous and infamous, the Nacionale is one of Cuba’s most treasured landmarks. Hemingway visited Havana’s signature Art Deco grand dame during the 1940’s and most famously donated a blue fish specimen to the Sirena bar.
What: Housed in a Spanish style neoclassical building, this 442-room property is a throwback to Havana’s glamour days; it is easy to imagine Hemingway enjoying a sunset mojito on the garden terrace overlooking the Malecon or strolling through the building’s columned arcades and palm-shaded lawns. Loaded with history and colonial charm, this ageing beauty has been declared a World Heritage site by UNESCO and its mojito cocktails are rated as the best in the world.

5. Tropicana
Where: In the grounds of the Villa Mina estate in Havana’s Marianao neighbourhood.
Why: In the jet-set heaven of 1950s Havana, the most decadent place to see and be seen was Tropicana, an unrivalled cabaret with a world-famous casino and dazzling showgirls dressed in sequins and feathers. Celebrities including Hemingway gathered here for its renowned all-night partying.
What: Since opening in December 1939, the wondrously kitsch Tropicana has become an obligatory hotspot; its grand outdoor main salon accommodates an audience of around 1,000 around the stage, all eager to watch scantily clad dancers perform flamboyant cabarets. Little has changed at this iconic Havana institution since its 1950’s heyday apart from the entrance price which costs between £44 and £56, depending on where you sit.

4. Finca Vigia
Where: In the town of San Francisco de Paula, ten miles east of Havana.
Why: Hemingway purchased Finca Vigia, meaning ‘lookout house’ in 1939 for an estimated cost of $12,500. It was here that he wrote some of his most celebrated novels including ‘For Whom the Bell Tolls’, ‘The Old Man and the Sea’, ‘A Movable Feast’ and ‘Islands in the Stream’.
What: Hemingway lived at this rustic 12-acre estate until 1960; after his suicide in 1961 the Cuban government took ownership of the property and it became the Earnest Hemingway Museum. The entire house and its contents are all perfectly frozen in time. Visitors are not allowed inside, but may peer through the large windows to see the author’s writing studio, library, living room, bathroom and other private mementos – all exactly as Hemingway had left them. Hemingway’s beloved 38-foot powerboat, El Pilar, is dry-docked in the grounds. Admission costs £1.90.

3. El Floridita
Where: On the corner of Monserrate and Calle Obispo in the Monserrate district of Old Havana.
Why: On a small plaque in La Floridita hangs Hemingway’s signed quote: “My mojito in the Bodeguita del Medio and my daiquiri in the Floridita.” As a cocktail connoisseur, Hemingway believed the frozen rum daiquiris at La Floridita were the very best in the world.
What: Opened in 1817 as Pina de Plata (the Silver Pineapple), this bar-restaurant (self-promoted as the ‘cradle of the daiquiri’) was so beloved by Hemingway that bartender Constante Ribalaigua named a drink in his honour; the Papa Hemingway Special (or Papa’s Double) which is daiquiri with reduced sugar and added maraschino liqueur and grapefruit juice. Today, the notorious drinker still presides over the long mahogany bar; a life-size bronze statue of Hemingway by Cuban sculptor Jose Villa Soberon was unveiled in 1954 when the author was awarded the Literature Nobel Prize for The Old Man and the Sea, one of his most famous works.

2. Partagas Cigar Factory
Where: 520 Industria Street, behind the Capitolio building in the heart of Havana.
Why: Named for its founder, Don Jaime Partagas, who opened the cigar factory in 1845, Partagas is one of the oldest and best-known of all Cuban cigar brands. Havana is cigar city and the intriguing guided tours at the Partagas factory will even appeal to non-smokers.
What: Take a 45-minute tour of the traditional cigar-making process to witness every stage of production, all of which is done by hand by quick-fingered factory employees. Watch the workers strip, sort, roll and craft the cigars — and then marvel at the final boxed products. Visitors can also learn about Partagas’ dramatic history before heading to La Casa del Habano, which is located inside the factory. Tours cost approximately £6.30 per person.

1. Festival del Habano
Where: Throughout Havana every February.
Why: This annual five-day event celebrates the world’s best cigars, paying tribute to the world-famous brands. Activities include seminars, tastings, an industry trade fair, a master class on how to roll a Habano cigar and visits to tobacco plantations and cigar factories.
What: Attendees include La Casa del Habano managers from all over the world, tobacco producers, tobacco industry marketers, collectors, smokers clubs, and amateur smokers who all gather in Havana to pay tribute to Cuba’s most-treasured export. Devotees can visit the famous Vuelta Abajo region, in the province of Pinar del Rio, which provides most of the tobacco used to make Habanos. The festival culminates in a gala dinner. This year’s opening event takes place on February 26th and the welcome evening is dedicated to the Montecristo brand.

Further reading: Discover the top 10 things to do in Cuba, the Caribbean’s largest island, a rum-soaked paradise that masterfully balances stunning landscapes with an unrivalled depth of culture.