Top 10 things to do in Cuba

We discover the top 10 things to do in Cuba, the Caribbean’s largest island, a rum-soaked paradise that masterfully balances stunning landscapes with an unrivalled depth of culture.

10. Toast Papa Hemingway at El Floridita
Where: On the corner of Monserrate and Calle Obispo in the Monserrate district of Old Havana.
What: Opened in 1817 as Pina de Plata (meaning the Silver Pineapple), this bar-restaurant was so adored by Cuba devotee Ernest Hemingway that bartender Constante Ribalaigua named a drink in his honour. Fans can raise a glass to the American novelist and cocktail connoisseur by downing a Papa Hemingway Special (or Papa’s Double) which is daiquiri prepared with reduced sugar and added maraschino liqueur and grapefruit juice.
Highlights: Once known as the ‘cathedral of cocktails’, this renowned Havana drinking haunt now styles itself as the 'cradle of the daiquiri'. Hemingway’s legacy is ever apparent; from the hanging plaque on the wall with his signed quote "My mojito in the Bodeguita del Medio and my daiquiri in the Floridita” to the life-size bronze statue of the author propped up at the long mahogany bar.

9. Book a room at Hotel Nacional de Cuba
Where: In the central Vedado district, overlooking the Malecón, Havana’s oceanfront boardwalk.
What: Housed in a Spanish-style neoclassical building overlooking Havana’s harbour, this 457-room grand dame opened in 1930 and became a playground for the likes of Al Capone, Ava Gardner, Errol Flynn and Frank Sinatra. Nowadays this luxurious hotel lures with Art Deco flourishes, eclectic interiors, columned arcades, palm-shaded lawns, a stunning garden terrace, two swimming pools and a fitness centre.
Highlights: Declared a World Heritage site by UNESCO, this national monument is inextricably linked to the mobster years, most notably when Lucky Luciano and Meyer Lansky called a mafia get-together here in December 1946. Evidence of the Nacional's illustrious past is everywhere; from bullet holes in its façade leftover from a 1933 rebellion to a network of underground tunnels built during the Cuban Missile Crisis. People-watch in the lobby, enjoy pre-dinner cocktails at La Terraza, and feast your eyes on displays of memorabilia from a bygone age.
More information and to book: With its privileged location in the middle of Vedado, the centre of Havana, Hotel Nacional de Cuba stands on a hill just a few meters from the sea, and offers a great view of the Havana Harbour; the seawall and the city. 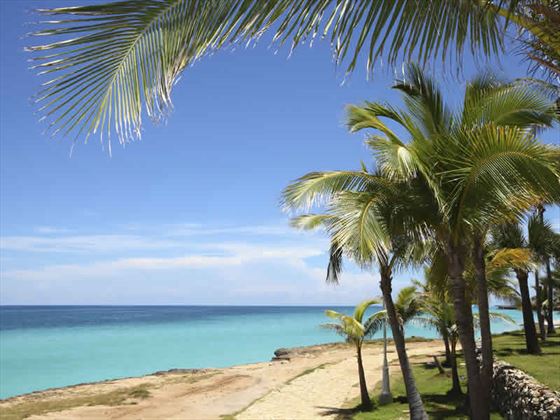 8. Hit the sands at Varadero Beach
Where: On the Hicacos Peninsula on the northern coastal tip of Cuba, 200km east of Havana.
What: Perfectly positioned between the Bay of Cárdenas and the Straits of Florida, this sun-soaked hotspot is a 13-mile stretch of powder-white gleaming sands backed by emerald Atlantic waters. Often referred to as Playa Azul (translating in Spanish as Blue Beach), it combines Caribbean glamour with Cuban charm - most visible at the swanky all-inclusive mega hotels that line its stunning palm tree-lined shores.
Highlights: Zip around the streets of Varadero at high speeds in a bright yellow Coco Taxi, a three-wheel spherical-shaped vehicle with a domed roof that is the Cuban equivalent of a rickshaw. Crash out on glistening sands or enjoy some of the exhilarating water-based diversions including jet-skiing, parasailing, windsurfing, aqua biking, kayaking and scuba diving - there are over 30 dive sites in the surrounding area. For ultimate glamour, check into all-inclusive Royalton Hicacos Resort &amp; Spa, a sumptuous five-star beachfront property complete with 404 suites in plantation-style houses, a sublime spa, freshwater pools and gourmet-style restaurants.
More information and to book: Set on one of the finest locations on Varadero Beach, Royalton Hicacos Resort & Spa boasts an astonishing array of activities, including a great range of land and water sports. 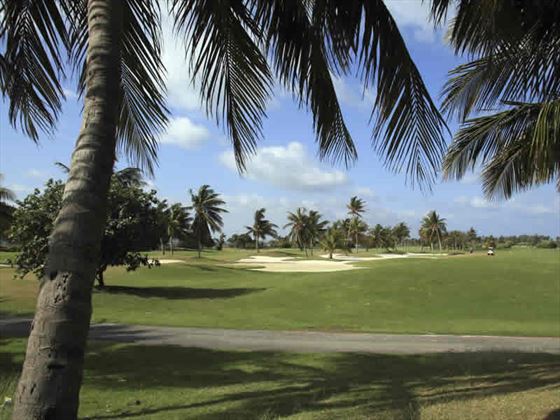 7. Tee off at the historic Varadero Golf Club
Where: On the San Bernardino crags in Varadero, with most holes overlooking Cárdenas Bay.
What: Built on the site of Xanadú - a lavish colonial mansion that was commissioned in 1928 by American millionaire and chemical manufacturer Irénée Dupont - this 18-hole, par-72 course opened to the public in 1998. After the 1959 revolution, Fidel Castro denounced golf as a bourgeois hobby and subsequently closed the Cuba’s courses. Out of a dozen or so courses, the Varadero Golf Club was the only one to survive his regime.
Highlights: Set on the shores of the peninsula overlooking the ocean, this 6,269-metre course features three putting greens, one pitching green, practice bunkers and two driving ranges, all of which are open for public play. Once you’re done at the 18th hole, head to the famous clubhouse that was formerly Xanadú – its name inspired by English poet Samuel Taylor Coleridge’s poem Kubla Khan in which he describes the palace built by the legendary Chinese warrior as a ‘stately pleasure-dome’. Nowadays it houses a French restaurant with an extensive wine cellar.

6. Watch workers expertly hand-roll fine cigars in Pinar del Rio
Where: At Calle Antonio Maceo 157 off the Plaza de la Independencia in Pinar del Río.
What: Located in Cuba’s lush green mountainous westernmost province, Pinar Del Rio (meaning ‘pine of the river’) is the centre of the cigar industry. The showpiece here is the Francisco Donatién Factory, a tiny cigar factory housed in a former 19th-century prison that opens to the public for tours on weekdays (9am to 4pm) and weekends (9am until noon).
Highlights: Home to Cuba's renowned Trinidad brand, each 20-minute factory tour offers a fabulous insight into cigar production. Walk through the rolling station to watch cigar-makers seated at wooden benches sort through leaves and roll cigars at speed. Spend time visiting the rooms dedicated to the final selection, grading, labelling and boxing before stocking up on cigars from the on-site cigar store. Alternatively, head across the road to the Casa del Habano store which has a patio bar and smoking room. Admission costs £6. 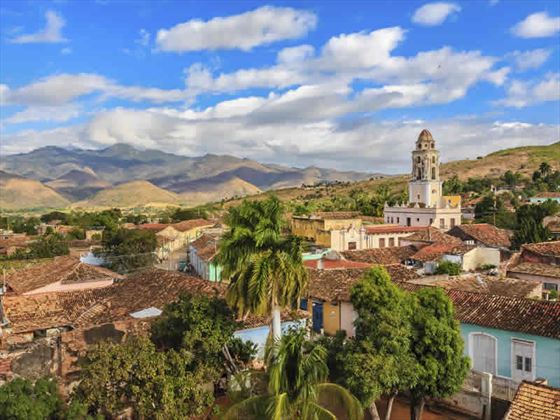 5. Explore time-warped Trinidad
Where: In the central Cuban province of Sancti Spíritus.
What: Founded in 1514 by Diego Velaquez and built on the back of the sugar and slave trade, the UNESCO World Heritage Site of Trinidad is Cuba’s colonial gem. As a perfectly preserved mid-19th-century sugar town, it enchants history buffs with an architectural feast of pastel-coloured houses, beautiful squares and plenty of horse-drawn carts that bump along uneven cobblestone streets that have barely changed since the colonial era.
Highlights: Some of Cuba’s best museums are located around Plaza Mayor, the neo-baroque square at the heart of the old town. Most fascinating is the grandiose Museo Histórico Municipal which houses sugar industry exhibits in a neo-classical mansion once belonging to Cuba’s richest families. Also worth a visit is Museo Romántico, a marble-floored mansion-turned-museum boasting collections of period antiques, porcelain, paintings and furniture, and Antigua Convento de San Francisco, a distinctive pastel yellow-and-white domed bell tower that is probably Trinidad’s most recognisable building.

4. Cycle through Viñales Valley
Where: In the western province of Pinar del Río.
What: A lush green valley surrounded by mountains, this tobacco-rich region made the UNESCO World Heritage Site list in 1999. Defined by a dramatic landscape dotted with bright green tobacco fields and giant top-rounded limestone karsts called ‘mogotes’, this striking region is home to Cuba’s cigar-making industry.
Highlights: Cycling around this relatively flat terrain gives adventurous types scope for independent exploring. Rent a bike from one of the casa owners and head to the lookout at Los Jazmines, a pastel-pink colonial-style mansion hotel perched on the peak of a hill that offers unparalleled valley views. Explore the charming town of Viñales and journey on to the popular Cueva del Indio (Indian Caves) and Viñales Botanical Garden, known as Cuba’s Garden of Eden. Further afield is Gran Caverna De Santo Tomás, Cuba's largest cave system with over 46km of underground galleries. The Viñales Valley supports its own microclimate and as it rains most afternoons between June and October it’s best to cycle in the mornings.

3. Hop on a stream train to the Valley of the Sugar Mills
Where: In central Cuba, around 12km outside of Trinidad.
What: A series of three interconnected valleys, Valley de los Ingenios (Valley of the Sugar Mills) is a so-called ‘living museum of the booming Cuban sugar production years’. The best way to see the sites of 60 former cane sugar mills, colonial plantation houses, slave quarters and barracks is aboard a vintage 1907 American steam train that departs daily for the valley from the centre of Trinidad on Calle Antonio Guiteras Final.
Highlights: Offering an insight to the history of slavery in what was one of the most influential sugar-cane growing areas in Cuba, the train journeys across the lush green valley to cross sugar cane fields and past the peaks of the Sierra del Escambray until it stops at the tiny station at the Manaca-Iznaga estate. Most fascinating here is the 148-foot-high tower, built by the owner Pedro Iznaga in 1845 as a lookout for supervising his slaves. Climb to the top of the tower for views of the entire valley and take lunch at Casa Hacienda, the Iznaga family’s old manor house that now operates as a restaurant.

2. Dine at the elegant Palacio de Valle
Where: At the end of Punta Gorda, past the Malecón, in Cienfuegos on Cuba’s southern coast.
What: With its beautiful bay facing out to the Caribbean Sea, Cienfuegos (Cuba’s Perla del Sur meaning Pearl of the South) was founded in 1819 by French immigrants. A charming port city that achieved UNESCO World Heritage Site status in 2005, a distinctively French vibe prevails in its architecture, harbourfront buildings and street layout. The showstopper here is Palacio de Valle, a kitsch masterpiece built in 1917 by sugar baron Acisclo del Valle Blanco to resemble the Moroccan stucco and tile work of the Alhambra.
Highlights: This eclectic residence was abandoned by its owner in 1922 and after operating as an art school it is now an upscale restaurant attached to Jagua Hotel. Fusing baroque, neoclassical and Gothic styling with plenty of Italian-marble columns, hand-painted tiles, intricate ceilings and crystal chandeliers, the setting is knockout; from the gorgeous ground-floor Salón Comedor (dining room) and inviting rooftop balcony bar to the tapas bar and basement wine cellar. Arrive early enough to enjoy a sundowner on the roof deck and feast on freshly-prepared seafood, delectable lobster and a superb selection of fish specialties.

1. Capture the carnival spirit at Santiago de Cuba
Where: Enclosed by the Sierra Maestra mountains in the south-east, 880 km from Havana.
What: As the most compelling cultural showstopper outside of Havana, Cuba’s second-largest city has a flavour all its own. Founded by Spanish conquistadors in 1515, Santiago de Cuba set the stage for some of the most storied events in Cuba's history and produced some of its most notorious revolutionary heroes. Officially designated The Heroic City status by Fidel Castro in 1984, it is also credited as being Cuba’s ‘most Caribbean’ city.
Highlights: Dating back to colonial times, Santiago de Cuba’s Carnival takes place every year at the end of July. A week-long street party with flamboyant costumed performers, musicians, drummers, street dancers, street vendors, stages and sound systems, this is Cuba’s most famous carnival. Following a conga parade held in each neighbourhood to kick off the festivities, highlights include float processions, choreographed dance troupes and a Carnival Queen. Head to Avenida Jesús Menéndez and Victoriano Garzón - where the parade and float judging takes place - to fully appreciate this explosion of sound and colour.

More information and to book: Our seven-night tour through Cuba's main attractions is an unforgettable experience and an amazing insight into the history of this unique and vibrant destination.