Welcome to Copacabana; the most famous beach in the world. Bright blue waves roll onto a golden beach lined with beautiful bodies, some clothed some not, basking in the South American sun. It runs for three miles in front of Rio’s densely populated residential area and has become a byword for beauty, paradise and hedonism. They say life is islands of ecstasy in an ocean of ennui, with ennui derived from the French word for boredom. If this is true, Copacabana is one such island. 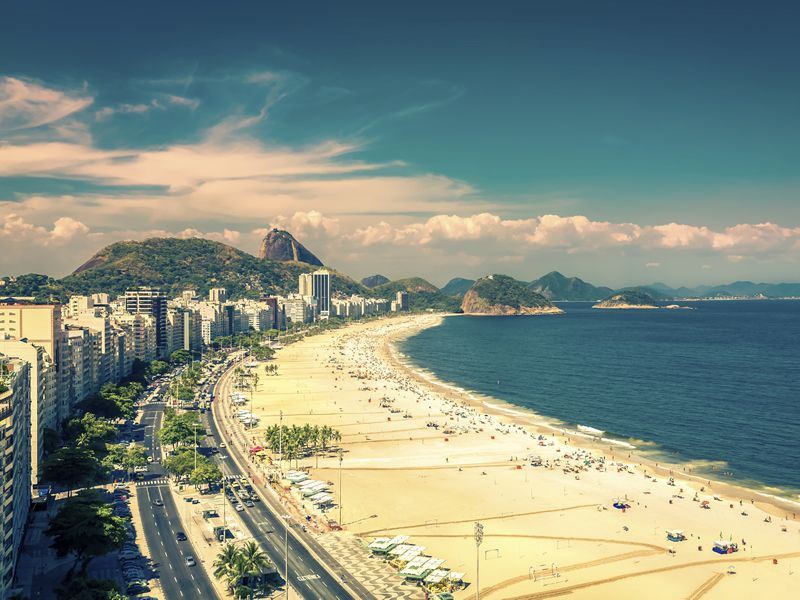 Rio lays claim to the most spectacular and seductive setting of any metropolis in the world. If Hollywood was a beach, this is its blockbuster. The cinematic cityscape is crowned with dramatically forested mountains overlooking surf lapped beaches. Forts stand like sentinels at either end of the sands; little pockets of history sandwiching the sun-drenched revellers basking on the beach. From the sands, the iconic Sugarloaf Mountain is beautifully framed against the blue sea. The lush backdrop for Rio’s romantic beaches is not only rare Atlantic rainforest, but also considered the world’s largest urban forest.

The beaches here are so plentiful they have been carved up into separate areas. Alongside the famous Copacabana are beaches for gays, nudists and transsexuals, so it may be worth taking a second to do some rudimentary research before you choose your spot of sand for the day. Ever prevalent is the presence of sport. Locals, known as Cariocas, and tourists alike playing bat and ball, favela kids playing football and nearly naked men and women indulging in volleyball. If you feel brave enough, you can even join in a game of football and volleyball’s inevitable lovechild: footvolley. The rules are relatively self-explanatory, you play on a volleyball court, with a football, using only your feet and head. But beware, while the concept may be easy to understand the technique is difficult to master. This highly skilled game, and the amount of Brazilians you see on the beach playing regular football, goes some way to providing an insight into their remarkable record of achievement in football. And the excitement is building already for next year when they host the competition closest to their hearts; The World Cup.

The country has been investing in infrastructure and social initiatives to improve the impression it gives when the eyes of the world are watching during Brazil 2014 and the Rio 2016 Olympics. However, not everyone is happy with how the government has chosen to raise and spend the funds to update the nation. A recent hike in bus fares triggered a protest which mutated into countrywide riots as it unearthed every other grievance that Brazilians’ harboured towards their government. Social malaises such as endemic corruption, endless inequality and police brutality became topics of discussion and causes to protest. The beach is a safe haven from these problems but can’t claim to be perfect either. There are hustlers, hawkers and opportunistic thieves, but they’re not all bad. Well, the thieves probably are. However, some of the hawkers sell caipirinhas, the uber-refreshing cocktail made from sugar cane spirit, fresh lime and brown sugar. Others sell acai, the delicious deep red berry recently pronounced as a ‘superfood’ due to its high levels of antioxidants. And if it’s fake Havaina flip flops or counterfeit Ray Ban’s you’re after, then look no further.

Welcome to Copacabana. They often say Rio is a city of contradictions; immeasurable beauty living next door to raw poverty and five star hotels bordering favelas and shanty towns. But, the most famous beach in the world is an exception, a frenetic place of paradise derived from an ocean that sparkles and the beautiful people that bathe there. It has it all, except one thing. The Brazilian’s don’t have a word for boredom.

Highlights of Buenos Aires and Rio

Best of Argentina and Brazil